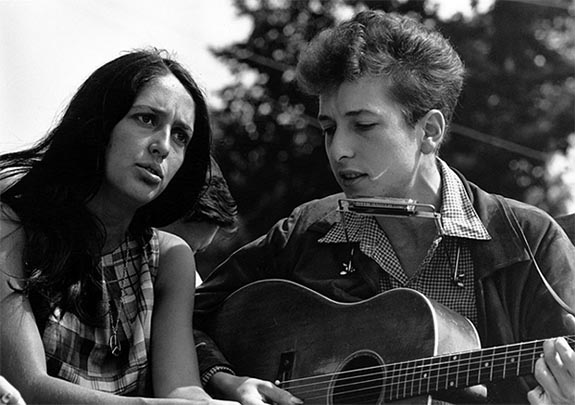 Baez and Dylan had been in a relationship 10 years earlier, and Dylan’s call sparks a cascade of memories — both uplifting and heartbreaking — that are symbolically reflected in the title of the song and the following lyrics…

She sings, “Ten years ago / I bought you some cufflinks / You brought me something / We both know what memories can bring / They bring diamonds and rust.”

Baez goes on to tell the story of the “unwashed phenomenon” and “original vagabond” who strayed into her arms. She sweetly recalls how his eyes were bluer than robin’s eggs. She also explains how he seemed “temporarily lost at sea” and how she did her best to keep him unharmed. Sadly, the relationship wasn’t reciprocal and the couple parted ways.

When Dylan placed the surprise call to Baez in 1974, she sensed his life was “heading straight for a fall.” Music historians believe this was a time when Dylan’s marriage was on the rocks and he was looking to rekindle his relationship with Baez.

But, as we see in the last line of the song, Dylan’s outreach is strongly rebuked. With nothing left to give him, she sings, “It’s all come back too clearly / Yes I loved you dearly / And if you’re offering me diamonds and rust / I’ve already paid.”

When introducing “Diamonds & Rust” at live performances, Baez describes Dylan as “by far, the most talented and crazy person I’ve ever worked with.”

Joan Chandos Baez, who was born in Staten Island, N.Y., in 1941, is best remembered for her folk music performances of the 1960s, which included 14 songs at the Woodstock Festival in 1969. She was inducted into the Rock and Roll Hall of Fame in 2017. After 60 years of performing, Baez announced her retirement in 2019.

Please check out the audio track of Baez performing “Diamonds & Rust.” The lyrics are below if you’d like to sing along…

As I remember your eyes
Were bluer than robin’s eggs
My poetry was lousy you said
Where are you calling from?
A booth in the midwest
Ten years ago
I bought you some cufflinks
You brought me something
We both know what memories can bring
They bring diamonds and rust