Inspired by Fellow Canadian, Homesteader Proposes With a Carrot-and-Diamond Ring

Inspired by the story of a Canadian woman whose lost engagement ring turned up in a vegetable patch 13 years later — cinched tightly around a carrot — fellow Canadian John Neville looked to replicate the phenomenon to surprise his bride-to-be, Danielle (Deejay) Squires. 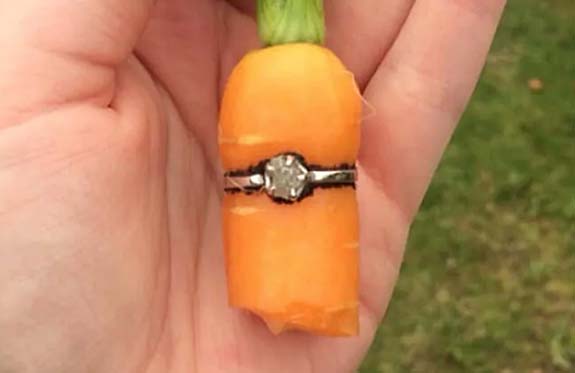 Neville recounted to The Washington Post how he had purchased the diamond engagement ring four years ago, but hid it in his work shed until he could come up with the perfect way to pop the question.

In June of this year, the resident of Newfoundland and Labrador, Canada, got to work.

First, he filled a five-gallon bucket with soil. Then he pressed the engagement ring into the center of the bucket to bury it. Using a pencil, he poked a narrow hole aimed right through the center of the ring. He put a few carrot seeds in the hole, sprinkled a bunch of seeds around the perimeter of bucket and hoped for the best.

After tending his secret project for three months, it appeared that the carrots were ready for harvesting.

On Saturday, he invited Squires and their three-year-old son, Eric, to pick some carrots for dinner.

Neville was relieved when Eric pulled a few well-formed carrots from the other edge of the bucket. Then he asked Squires to pull the one in the center.

As she wriggled it out, Neville went down on one knee and said, “I love you very much. Will you marry me?”

At first, Squires was a bit confused, but when she realized her new engagement ring was wrapped tightly around the middle of the carrot, her eyes started welling up and she nodded “Yes.”

“I was in complete shock when I saw the ring on the carrot,” Squires told CBC News.

Then young Eric took a bite from the tip of the engagement carrot. 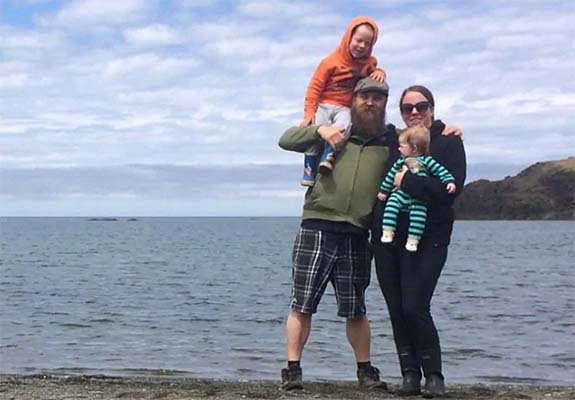 Squires’s new ring features a raw, uncut diamond. The couple noted that the stone pays homage to their homesteading way of life on Pinchgut Lake near Corner Brook. They have yet to pick a wedding date. 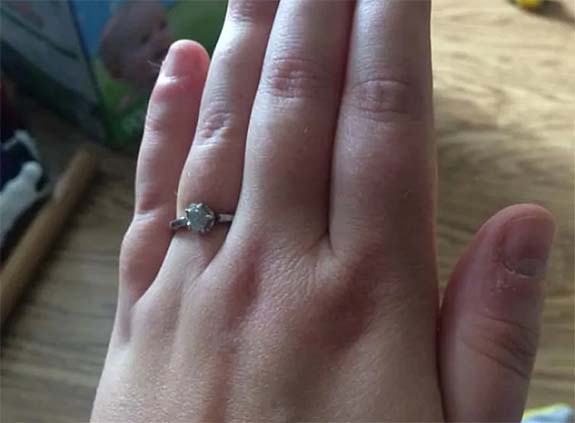 “Of course, he wanted to do something unique and imaginative,” Squires told CBC News. “He just wanted the perfect idea to come along, and I guess it was worth the wait.”

“The more I think about it, the more amazing it is,” she told The Washington Post.

Neville had been inspired by the story of octogenarian Mary Grams, who lost her diamond engagement ring while gardening at her family’s farm in 2004. After unsuccessfully searching on her hands and knees for days, she gave up, assuming the ring she had worn since 1951 was gone forever. 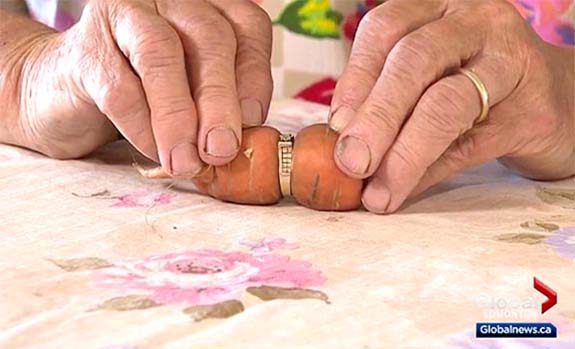 Grams secretly bought herself a less-expensive replacement ring and never told her husband, Norman, of the mishap. Thirteen years later, her daughter-in-law, Colleen Daley, called with some fabulous news. Daly, who had moved to the farm, found a strangely deformed carrot while plucking vegetables for her family’s dinner. The carrot was squeezed in the middle, like it was wearing a corset. On closer inspection, she saw that the constriction was caused by a diamond engagement ring.

“I asked my husband if he recognized the ring,” Daley told CBC News. “And he said, ‘Yeah.’ His mother had lost her engagement ring years ago in the garden and never found it again. And it turned up on this carrot.”

And the crazy carrot stories don’t end there. In December of 2016, the German press first reported the story of an 82-year-old man from Bad Münstereifel, who found his lost wedding ring wrapped around a carrot. The retiree had lost the ring while gardening three years earlier and then discovered it while collecting vegetables from his garden. The man, whose name was not released, had just celebrated his 50th wedding anniversary.

And way back in January of 2012, The Daily Mail and many other news sources covered the story of a Swedish woman named Lena Påhlsson, who pulled up a carrot cinched in the middle with a wedding ring she had lost in 1995. The ring has gone missing in her kitchen and she assumed that it must have gotten mixed up with some kitchen scraps that ended up in her compost pile. That material found its way to her vegetable garden and the rest is history.