Back in February of 1981, Prince Charles proposed to the 20-year-old Lady Diana with a big blue sapphire-and-diamond ring that the future princess got to pick out herself. According to the editors of Vogue, some members of the British royal family fumed at Diana’s choice — not because it featured an unconventional center stone, but because it was a stock item from the Garrard catalog. 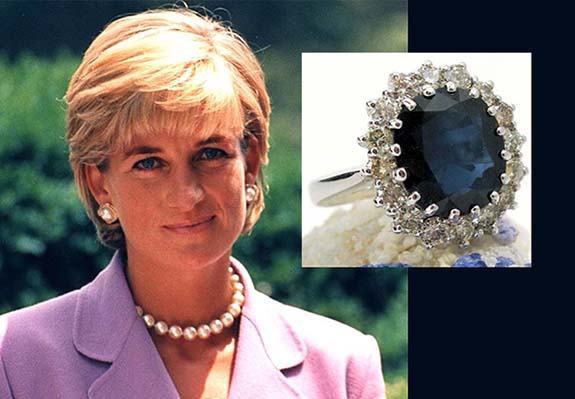 Founded in London in 1735, Garrard was the official crown jeweler of the UK from 1843 until 2007. The distinguished company that had been entrusted with the upkeep of the British Crown Jewels was the logical source for Diana’s bridal jewelry.

So, in the lead-up to their engagement, the 32-year-old Prince Charles presented his bride-to-be with a bunch of design options from Garrard. Her favorite was an 18-karat white gold ring set with a 12-carat oval Ceylon sapphire surrounded by a halo of 14 round white diamonds.

In Diana’s eyes, the ring was perfect. She loved it so much that she didn’t request any modifications or customizations.

In the eyes of her critics and some members of the royal family, the ring was sub-standard because it was hardly unique. Critics called the Garrard stock item a “commoner’s ring” because any non-royal with $60,000 to spend could purchase the exact piece.

Nevertheless, Diana’s sapphire and diamond engagement ring would become one of the most recognizable and imitated engagement rings of all time. Gerrard still features a sapphire ring with a halo of 12 diamonds in its “1735 Collection.” (The ring seen, above, is a replica with 16 accent stones.)

Diana wore the ring throughout her marriage and even, on some occasions, after her divorce from Prince Charles in 1996.

After Diana died tragically in 1997, her sons, then 15 and 12, were given an opportunity to select a keepsake from their mom’s possessions.

Prince William picked a Cartier watch that his mom received on her 21st birthday and Harry got the sapphire engagement ring.

But, wait… Didn’t Prince William famously propose to Kate Middleton in October of 2010 with his late mother’s sapphire ring? Well, yes. We learned in April of this year, that the sapphire ring proposal was made possible by the selfless act of William’s younger brother, Harry.

According to Diana’s former butler, Paul Burrell, the princess’s ring was in Harry’s possession for 12 years. When William broke the news to his brother that he was about to propose to his long-time girlfriend, Kate, the younger brother said, “Wouldn’t it be fitting if she had mummy’s ring? Then one day that ring will be sat on the throne of England.”

William accepted his brother’s generous offer and the rest is history.