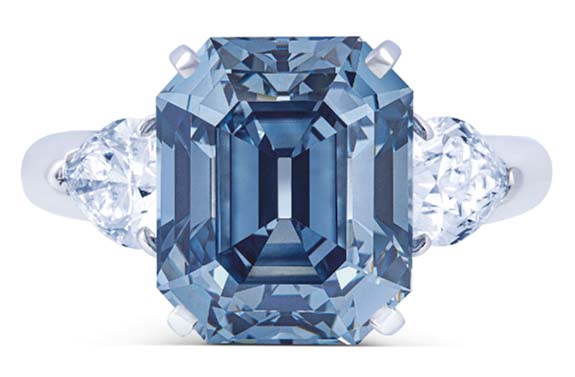 Designed by London-based luxury jeweler Moussaieff, the platinum ring features a rectangular-cut center stone flanked by two pear-shaped diamonds. Christie’s had estimated the ring would sell in the range of $10 million to $14 million.

The blue diamond boasts a clarity rating of VVS2 and a purity classification of Type IIb, an ultra-pure grade that accounts for only 0.1% of all natural diamonds.

In all, the Christie’s auction at the Four Seasons Hotel des Bergues yielded $55.9 million, with 12 lots realizing more than $1 million.

Here are some of the highlights… 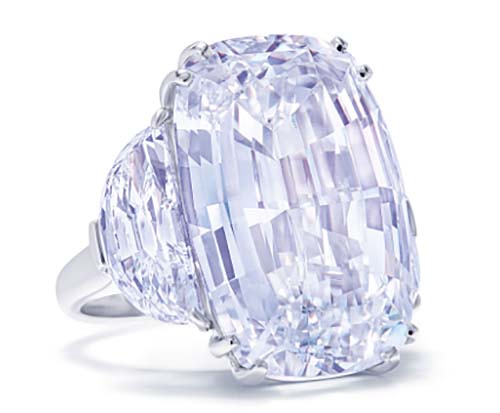 • A D-color, internally flawless diamond weighing 46.93 carats fetched $3.2 million. The cushion step-cut stone is flanked by half-moon-shaped modified brilliant-cut diamonds weighing 3.64 and 3.35 carats in a platinum setting. The ring had a pre-sale estimate of $3.8 million to $4.5 million.

• A fancy light purplish-pink, cut-cornered rectangular mixed-cut 32.49-carat diamond sold for $2.6 million, well above Christie’s pre-sale high estimate of $2.2 million. The center diamond carries a VS2 clarity grade and is set on a thin gold band accented with round diamonds. 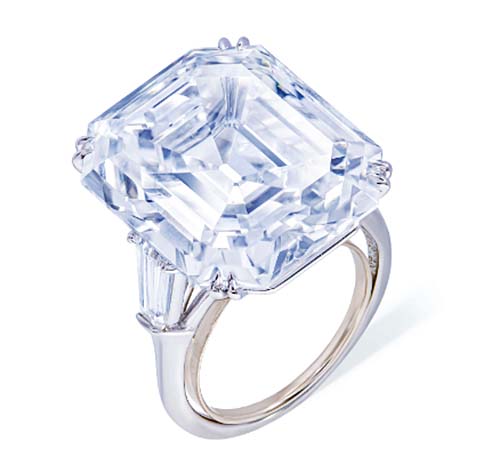 • This ring by Harry Winston, which features a rectangular-cut, VVS2, 25.20-carat diamond flanked by tapered baguettes, sold for $2.6 million. The ring was expected to sell in the range of $1.8 million to $2.2 million. 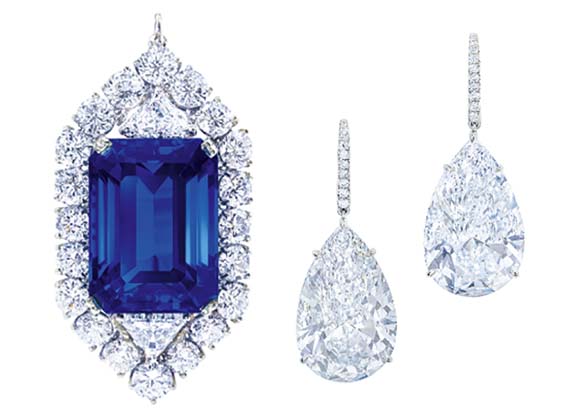 • A royal blue octagonal step-cut Burmese sapphire weighing 42.97 carats achieved a winning bid of $2.6 million. Set in a pendant and accented with triangular and round diamonds, the sapphire shows no indications of heat treatment. The piece entered the auction with a pre-sale estimate of $2 million to $3 million.

• Pear-shaped diamonds weighing 12.71 carats and 12.07 carats highlight a pair of platinum earrings that sold for $2.2 million. Both diamonds boasted D-color ratings, flawless clarity and excellent symmetry. The pre-show estimate for the pair was $1.9 to $2.5 million.